10 Indian Vegan Foods Everyone Should Try

When you think of vegan foods, you undoubtedly think of Indian vegan foods. Or just Indian food.

The Vegan food movement has gained new ground (and followers) everywhere in the world, and Vegas is not far behind.

For both our locations in Las Vegas, we have also recreated many dishes and turned them into vegan favorites. Take, for instance, the Chicken Tikka Masala, for which we introduced a vegan version, the Vegan Chicken Tikka Masala. This was a crowd-puller at the Vegas Veg Fest and the Veganuary event, a vegan event held each year in Las Vegas. It instantly achieved a cult-worthy following amongst our vegan guests. 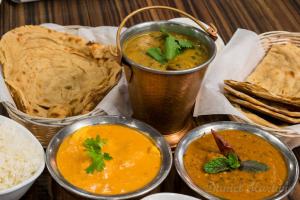 We also altered the Kofta and makhani sauces to offer creamy, yet non-dairy versions of these famous Indian gravies. Our Vegan Koftas enjoyed immense fanfare from both vegan and non-vegans alike.

But if you look at staple homestyle Indian food as well as the Indian dishes available at the best Indian restaurants, you will find a wide variety of vegan dishes.

This is because, for many thousands of years, a huge number of Indians have been pure vegetarian or eat only vegetarian food on certain days of the week.

Traditionally, most Indian dishes are vegan.

Not only are most Indian dishes pure vegetarian, but they are also dairy-free. A vast majority of Indian dishes are also gluten-free. This makes Indian food ideal for those who follow a vegan/vegetarian diet or are gluten or lactose intolerant as well as those who have Celiac disease. And of course, if you are on a keto diet, Indian food can make meals more flavorful.

Heres’s our round-up of 10 Indian vegan foods everyone must have (irrespective of their diet philosophy).

You’ll find some of these Indian vegan foods at our Lunch Buffet, neatly labeled for you. Our Indian Lunch Buffet is also a great way of trying various dishes, especially if you are just getting introduced to Indian cuisine. These Indian vegan foods are meatless and dairy-free, and the best part, they are vegan by default. They need no major alterations, except, we use oil instead of ghee (clarified butter) in some of these dishes. 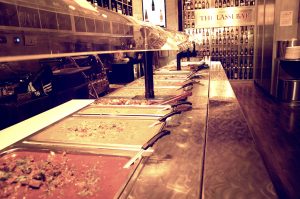 You can find many of these dishes at our daily Indian Lunch Buffet at both locations. Our dinner is served a la carte, and the menu contains a variety of vegan foods, clearly labeled for your convenience.

Unable to find an Indian vegan dish on our menu? Or want to try a variation of a popular non-vegan recipe? Just ask the server, and who knows, he might be able to get the chef to create it especially for you.