Our Vegan Menu Is Popular With Vegans and Non-Vegans Alike; the Vegan Chicken Tikka Masala Is a Favorite.

For a restaurant that goes to great lengths to cater to all dietary needs, including vegan, gluten-free (and even Jain food), it was natural for us to partner with Vegans Baby and participate in Veganuary 2019.

For the uninitiated, Veganuary is a British charity that “inspires and supports people to try vegan for January and throughout the rest of the year.” Las Vegas-based blogger, the founder of Vegans Baby and creator of Veganuary Las Vegas, Diana Edelman, leads this initiative in the valley.

At Mint Indian Bistro, we have a vegan version of almost every popular dish we serve on the menu. This includes a traditionally, meat and dairy-rich dish like Chicken Tikka Masala.

We first introduced our Vegan Chicken Tikka Masala at the Vegas Veg Fest and received an overwhelming response from the Las Vegas vegan community. Most recently, one of our patrons messaged us via our Facebook page to see if it’s available at the restaurant.

Of course, we included the Vegan Chicken Tikka Masala to our special Veganuary menu, along with other delicious and innovative dishes. We have primarily curated this special menu from our regular vegan menu to cater to those who have pledged to go vegan in January as part of this campaign.

The Vegan Chicken Tikka Masala is so popular now that we will be adding it to our regular vegan menu at both our locations. 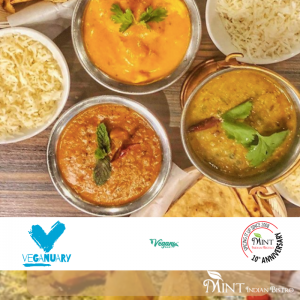 The Veganuary menu is available at both our locations from January 1 to January 31 for dinner only. Our daily lunch buffet is full of many vegan and gluten-free options and the dishes are clearly labeled with dietary icons.

Our Veganuary menu includes a vegan mango shake and appetizers like Gobi Chili, an Indo-Chinese chili gobi or cauliflower fritters stir-fried in a spicy sauce; and Vegan Chicken Chili, an Indo-Chinese fusion stir-fried vegan chicken dish. The entrees include Vegan Chicken Tikka Masala, in which vegan chicken is slowly added and simmered in a creamy, tomato sauce, blended to perfection with Indian spices; and Vegan Mango Cauliflower – cauliflower and mango chunks cooked in an onion and fennel-seed base to create a sweet and spicy sensational rival to the Maharaja Tikka Masala.

Both entrees are served with rice. You can also order Vegan roti.

For dessert, we are serving Vegan Khir, a delicious, healthier, dairy-free and gluten-free version of the traditional Indian rice pudding.

What are your favorite vegan dishes at Mint?